I had eagerly anticipated day 4 of my SXSW visit as it signalled the beginning of a number of Augmented/Mixed/Immersive Reality discussions. The first of which featured a number of experts in this field, most notably Tony Parisi, Head of AR, VR & Innovation at Unity. The talk was titled ”Immersion at Scale, AR / MR Will Change Everything” and Tony kicked things off with an initial statement ”Is this the year that AR/MR will break through? Don’t worry about that, just do it”.

There was a lot of discussion around what Augmented Reality, Virtual Reality and Mixed Reality should be called. The general consensus throughout the panel was ”XR”, although Steve Koenig of the Consumer Technology Association of North America (who organised the world’s largest consumer electronics show CES) suggested a move to ”immersive experiences”…

The key messages I took away from the talk focussed around 4 main topics:

Having been highly impressed with the Bose audio AR experience, I was interested to find out what was in store at the Bose VR experience which had taken over a full hall at the JW Marriott hotel. Having arrived in the afternoon, the hall was extremely busy and there were large queues for all of the VR exhibits. However, I did get the chance to visit a number of the smaller scale exhibits and was taken aback by the quality of production and storytelling presented at each. There was also the added bonus of watching hundreds of people wearing VR headsets, which never fails to make me smile! My favourite was a fun guy doing his very best Saturday Night Fever impression.

As SXSW also features a Music and Film strand, a number of the major broadcasters were in attendance. No more so than Amazon Prime with their latest show ”Good Omens” which is released on May 31st. I spoke to one friendly chap guy whilst in the queue who suggested I visit their ”activation” experience ”Amazon have gone all in with this baby”. It was impossible to walk  anywhere around SXSW without bumping into some ”Good Omens” branding, whether it was a bus advertisement on the SXSW shuttle busses, the cotton tote bags and umbrellas or the devils and nuns that patrolled the streets claiming ”the end is nigh”. Their activation experience was by far the most impressive in terms of hospitality.

After queuing for 20 minutes you were given a wrist band which gave you access into the ”Good Omens activation area”. The area offered free drinks, free food, a hairdressing service and a goodie bag with a ”prophecy” umbrella and pin badge. They also had a live band playing and several ”social media stations” where you would could create your own animated GIF that could be shared with your email address.

My last pit stop of day 4 was at the expo which was being held in the main convention centre. Once again as I’d done on day 2, I hadn’t allowed enough time to get all the way around the expo before it closed at 6pm. After visiting as many stands as I could, the one display that stood out to me was a team of robots playing ”The Final Countdown” on keyboards.

Day 5:  immersive tech – hold on things are getting real & the LG experience

Day 5 began in much the same way as day 4, with more discussion around immersive tech. This time the panel was composed of 2 industry heavyweights; Chris Bobotis, Director of Immersive Tech at Adobe and Eric Cheng, Immersive Media Lead at Facebook AR/VR. The panel was completed by Christina Hellerwith, CEO of creative production company Metastage who specialise in creating ”volumetric video” (think motion capture without the markers or suits).

After a very similar start to the previous day’s discussion around what immersive technology should be labelled, Chris made a statement which really struck a chord with me and what we always try to focus on at Eon when it comes to storytelling. He said ”A story doesn’t happen on any screen or device, it happens in the mind, in your imagination. Focus on the story. It’s our job to make software and hardware transparent. It’s your stories that count. It always goes back to story”.

Both Eric and Christina added to this, discussing the importance of knowing your audience and how they will be consuming these experiences. Eric stated ”Think about how your audience is consuming or downloading your content first. For example, have they got a headset? Are they looking through a magic window? Do they need to swipe etc?” Christina added ”What are the outcomes and goals of your project?”

The panel also discussed the ”democratisation” of immersive tech and as Chris had stated, creating these experiences shouldn’t be a painful exercise for the storyteller, they should be simple to create. Adobe are working on this for their Aero project, which we’ll be keeping a close eye on!

The most impressive ”experience” at SXSW in terms of hardware was from South Korean company LG. Their ”Inspiration Gallery” featured a large array of robots which are able to interact with and assist humans. They were also demonstrating a butler style robot named CLOi. Not only did the robot carry out household chores such as hoover, fetch and carry items & turn lights on and off, it also acted as a media centre for the home. On the back of the robot was a built-in projector which projects onto a flat surface any streaming service or TV shows that you have downloaded. It also had an interactive tablet installed on the front giving you the ability to browse the web. If that wasn’t enough, when you’re not at home, it acts as a security guard patrolling rooms and relaying video footage back to an app on your smart phone.

However, the most impressive thing for me about these ”bots” as the staff were calling them, was the artificial intelligence (AI) they utiilised in order to understand human behaviour. Much like a human butler would know what time you wake so would have things ready without asking, LG are using AI to tailor the behaviours of the ”bots” to their owners. 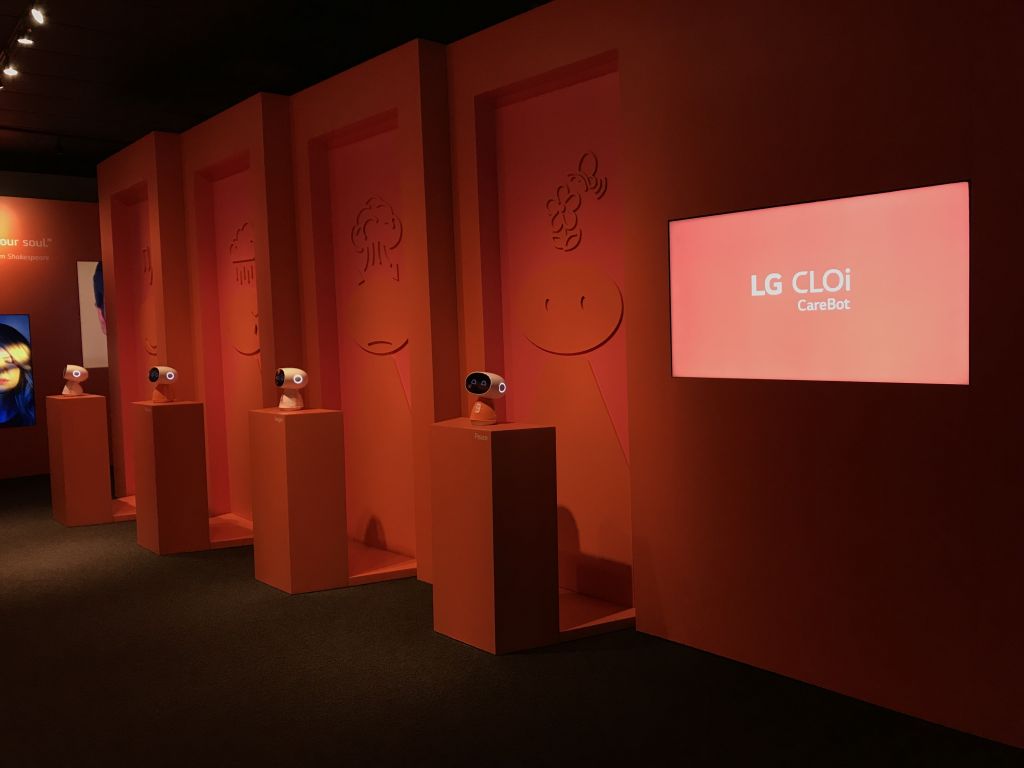 The next exhibit at LG’s ”Inspiration Gallery” was something called a ”fantastick”, an illuminated stick that crowds can use to engage with a live performance. The lighting patterns and colours can be pre-programmed so the director of the live performance can illuminate and animate the crowd at any moment during the performance.

Another interesting tie up was LG & jewellery brand Swarovski. The legendary crystal jewellery brand has teamed up with LG for an interesting project named ”Shine”. Using Swarovski’s iconic crystals and LG’s tech know-how, a range of wireless headphones will be hitting the market just in time for Christmas 2019…

Within Eon we have our very own master home brewer; Jon Adlard, and I did wonder what he’d think to LG’s automated home brewing machine. Taking their inspiration from Nespresso, LG will be offering customers the chance to purchase their own automated brewing station, taking the constant care, cleaning and attention away from the home brewer. After loading your capsules full of malt, yeast, hop oil, flavour and water, you let LG’s Home Brew kit do the work and you’re notified via a message to the app on your phone once your brew is ready. And the taste? I couldn’t tell you.

The final stop in the ”Inspiration Gallery” was reserved for the LG Signature OLED TV…. and WOW what a piece of kit. What makes it different to your average TV is that the screen rolls up inside the cabinet so when not in use it acts as a coffee table or cabinet. It can also retract so that only a portion of the screen is on display and acts as a clock and weather forecaster. The hugely impressive 65” 4K screen extends and retracts fully in approximately 15 seconds. How cool is that?

I started this insights piece by asking the question; so what’s next? For me this can be summarised by the following:

If you’re interested in finding out how we’re working with innovative technology, then head over to our innovations page.