Two of our staffers; James and Matt recently attended the “In with a Bang” and “Made in Hull” events to kick start our year as City of Culture. They both came away with very differing opinions. Read their tales below…

Emotional, breath-taking, stunning were the words I posted along with some photos on to my social media feeds on Monday evening, after returning from the Made in Hull installation, and I meant every one of them.

The evening started at the C4DI as I gave my family a tour of the fantastic facilities at our digital innovation hub. We’d arrived at sunset and just in time to sit in the amphitheatre (known as @TheDock) outside and take in the wonderful ‘Arrivals and Departures’. A stop motion animation projected onto the side of The Deep which told the story of Hull – ‘a place built on working hands washed here by the sea’. I stood up and watched as the family names flicked over on the side of The Deep and felt my eyes welling up as a wave of emotion passed over me. The feeling of pride and passion for my City was overwhelming.

After a deep breath, and telling the wife I had something in my eye 😉 we continued to the underpass and took up a position to watch ‘Embers’. A multi-screen and sound installation that tried to re-create the 90s club scene in Yorkshire. After a promising start showing the fashion and hairstyles of an era I and the wife were all too familiar with I found the main video monotonous and the pulsing of the footage irritating.

The next stop was Scale Lane to take in the video ‘Dignity of Labour’, a stylised take on the struggle of unemployment in a city that has had its fair share. This video was projected onto the side of an old brick building and I really liked the way the footage picked out the brick work. I found the message of this video very uplifting as it climaxed with a feeling of positivity and optimism for the job prospects of the unemployed. 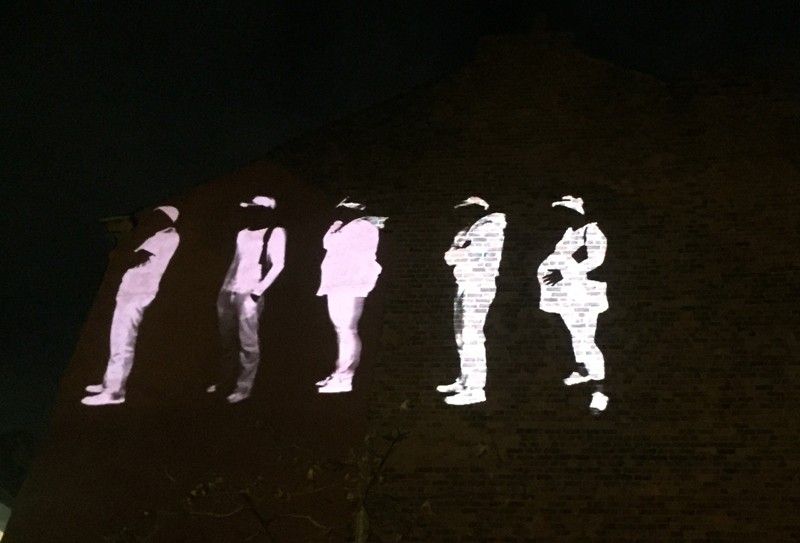 From Scale Lane we headed on to Whitefriargate to take in the numerous shops that had been converted into art installations, particular highlights for me were; ‘Amuse Agents’ Hull’s Premier Inconvenience store and ‘The Heart of Rugby’ – a tribute to our two professional Rugby League teams. 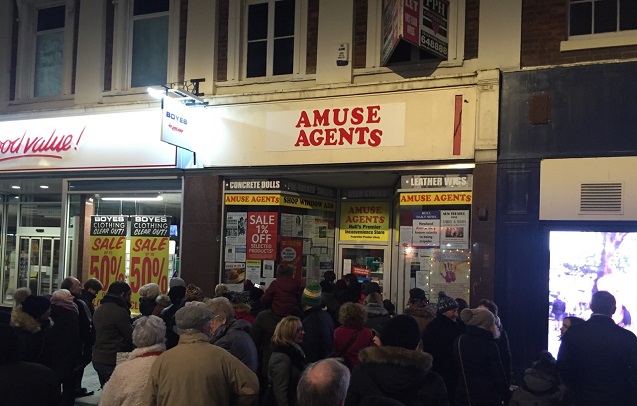 The Grand Finale was arriving in Queen Victoria square and taking up a place opposite the Ferens Art Gallery to watch ‘We are Hull’. An epic story re-telling the city’s past 70 years. The projections included; the Blitz with added smoke effects, newspaper headlines telling the story of the Gaul trawler tragedy, music highlighting the fantastic talent that has not only played in the City but emerged from it and a wonderful Hull Fair sequence that brought the whole Square to life, it felt like you were on Walton Street and I could’ve sworn I got a whiff of Bob Carvers! Footage also include tributes to our famous sons and daughters; Joe Longthorne, Roger Millward, Maureen Lipman, Amy Johnson, Clive Sullivan to name a few. And who could forget that goal from Deano that put us in the top flight of English football for the very first time.

Again, I was overtaking by emotion, however as my son was precariously balanced on my shoulders I couldn’t afford a wipe of the tears so managed to hold them back.

On the way back to the car I looked at my children and although they are both probably a bit young to understand what they had just seen I was, and still am, certain that they will never forget ‘that night they turned the town into a cinema’.

Right, what’s next? Did someone say turbine blades?

New Year’s Day 2017, I was settling down to stream the evenings City of Culture events on YouTube until the last minute when a kind neighbour offered me a spare ticket to the fireworks. Having heard about parking restrictions and traffic problems I was actually surprised at how quickly and easily I was able to drive into town and find a parking spot. So far so good.

Approaching Queen Victoria Square I could hear enticing sounds being played through the speakers and a large crowd of people, it sounded awesome, my pace increased with intrigue and anticipation. I arrived and the crowds of people, atmospheric sounds and the colourful displays had a big initial impact, it looked and sounded really impressive.

Having found a spot and picked a building to watch the Made In Hull projections my experience went a bit downhill from there. The buildings that were chosen to project onto could not have been more awkward. The projections were distorted. I stood and watched a section of the video where newspaper headlines kept being displayed. Absolutely no chance of being able to see what they actually said or put the display into any context. Whilst the audio was good, I didn’t feel it told enough of the story. I’m certainly no historian and although I have lived in the city my entire life have to confess that I am not very clued up on my local history. Unfortunately this event didn’t teach me anything.

Getting rather frustrated, I decided to head to the Marina to get a good spot for the firework display.

Some friends were already at the event and had tickets for Zone A too so we arranged to meet, however this was before I was told by a steward that no more people were allowed past a specific point. I found an alternative spot and waited. Video content was being played to keep the crowd entertained, which again, didn’t really do it for me; I could hear the audio from two screens at different times so it was like a constant echo.

Once the fireworks started I thought I was experiencing double vision – the same fireworks coming from two separate barges… why? They were supposed to be timed to music too and whilst I could see the intention, it just didn’t work. The fireworks were impressive but nothing out of the ordinary.

I felt the money spent on the firework display could have been better used improving the city in other areas. The cost could at the very least have been halved – if the second barge had been removed I don’t think anyone would have known any different. The display felt repetitive and it only lasted 10 minutes.

In summary I wish I had watched the online stream. I found watching the drones more interesting than the fireworks and I bet the footage is amazing. Having listened to the experiences of others since the event, I do have to concede that I am in the minority and the buzz created around the city is invaluable. I’m still looking forward to future events and remain positive about City Of Culture on the whole.